Yellowjacket wasps are social insects, living in colonies of hundreds to thousands. Like other social wasps, yellowjackets vigorously defend their nest against threats, such as people who get too close to the nest entrance. Guard wasps stationed near nest entrances use chemical communication to warn the colony of intruders. Hundreds or thousands of wasps can quickly emerge from a nest and attack people or animals that venture too close.

Yellowjackets are either scavengers or predators on other insects. Some species commonly scavenge for sweets and protein-rich foods in and around garbage cans and picnic areas, especially in the fall. In most parts of the country yellowjacket colonies die out each winter shortly after the first frost. Queen yellowjackets survive the winter in sheltered locations like buildings or outdoors under bark, stones, loose leaves or other shelter.

The objective of a yellowjacket management program should be to reduce human encounters with the wasps, but not to eliminate them from the entire area since they are beneficial predators of insects. The two most productive and least environmentally destructive ways to do this are to modify the habitat to reduce access to food in the vicinity of human activities, and to use physical controls such as trapping and nest removal. 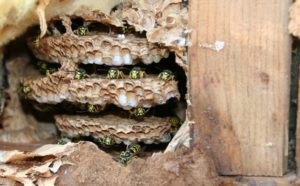 Occasionally nests will be constructed in walls or other protected sites. Portions of the paper nest may be visible where it extends beyond its protective shelter. Unlike “aerial yellowjacket” or hornet nests, exposed yellowjacket nests are not usually symmetrical in shape.

One teacher/staff complaint(s) received, or 5 or more wasps observed near food or picnic tables.

Yellowjacket nests can be located in a variety of places including in the ground, in masonry or other wall voids, on the eaves of buildings, on fences or in trees. Ground nests are often in sheltered locations such as under shrubs. In environments where these species occur frequently, a monthly inspection of buildings and grounds for nests during the active season may be warranted, with more frequent inspections during nesting seasons for problem species.

Preventing access to food, water and shelter is critical to reducing problems with bees, wasps and hornets. Yellowjackets are scavengers and typically become a problem where food and waste handling occurs. Screens on windows and exterior doors, tight-fitting lids on outdoor trash cans, recycling bins and dumpsters and frequent cleaning of these receptacles, and heavy trash can liners that reduce rips and leaks are effective approaches. Nesting sites can be reduced by capping open fence-pipe ends, and by sealing gaps, holes and other openings into voids in walls, doorways, eaves and roofs.

If non-chemical methods alone prove insufficient to solve the problem, then integrating a pesticide into your management program may be warranted. Always read and follow the label. The label is the law. Pesticides must be used in accordance with federal, state and local regulations. Applicators must have proper credentialing to apply pesticides and should always wear personal protective equipment (PPE) as required by the pesticide label during applications. All labels and Material Safety Data Sheets (MSDS) for the pesticide products authorized for use in the IPM program should be maintained on file. When an insecticide is considered necessary for the control of yellowjackets, the best approach is to confine it to the nest itself. Anyone applying insecticides should use special clothing that protects against the chemical as well as against wasp stings. Insecticides should be applied in the evening or very early morning when children are absent, the wasps are inside the nest, and cooler temperatures reduce insect activity. A number of insecticides are registered for use against yellowjackets, the following are most appropriate for use in schools:

Residual dusts can be very effective at controlling nests found in wall voids and underground nests. The extent of wall void nest should be determined by listening for activity behind the wall surface. Once the boundaries of the nest have been determined, holes can be drilled into the wall and an appropriately labeled residual dust can applied. The subsequent holes can be plugged with steel wool to prevent the wasps’ escape. Outdoor ground nests can be similarly controlled by approaching the nest at night and dusting the entrance; this procedure should be followed by plugging the entrance with dusted steel wool.

Silica aerogel combined with pyrethrins is an effective insecticidal dust that can be used to destroy an underground nest or a nest in a wall void. Silica aerogel is made from sand and works by absorbing the outer waxy coating on insect bodies. Once this coating is gone, the insects cannot retain water and die of dehydration.

Products with Components That “Freeze” Wasps

Pyrethrins can be used to quickly knock down guard wasps at the nest entrance and to kill yellowjackets in aerial nests when they must be destroyed in the daytime. These aerosol products are designed to project a stream of spray 10 to 20 feet and contain highly evaporative substances that “freeze” or stun the yellowjackets.

Do Not Use Gasoline

Gasoline should never be poured into underground nest holes. This dangerous practice creates a fire hazard, contaminates the soil, and prevents the growth of vegetation for some time. A ground application of gasoline poses greater harm to children and the environment than a yellowjacket nest.

Some “green” products may be found as part of EPA’s 25(b) exempt list. EPA describes the criteria for 25(b) products as: “Minimum risk pesticides that meet certain criteria are exempt from federal registration under section 25(b) of the Federal Insecticide, Fungicide, and Rodenticide Act (FIFRA). The U.S. Environmental Protection Agency (EPA) does not review or register pesticides that satisfy the 25(b) criteria, though registration is required by most states. For information on minimum risk pesticides in your state, please contact your state’s pesticide registration office.”

Inspect and monitor area 24 hours after treatment was made to ensure complete elimination of the colony of yellowjackets.

Other Principles to Consider